Jorge Ordóñez was the first person to introduce Txacoli wines into the United States with Bodegas Txomin Etxaniz from D.O. Getariako Txakolina. Founded in 1989, Getariako Txakolina is the oldest official Denominación de Origen for the production of Txacoli, a light bodied, high acid, aromatic white wine that pairs perfectly with seafood. Getariako Txakolina is named for its the miniscule fishing village of Getaria that it surrounds, located in the Basque Country on the Bay of Biscay.

Txakoli from Getaria is produced from two indigenous grapes, that have been grown on the wind and rain battered cliffs overlooking the Atlantic for centuries. Named Hondarrabi Zuri and Hondarrabi Beltza (Beltza means Black in Basque).

The driving force behind D.O. Getariako Txakolina is Bodegas Txomin Etxaniz, which is owned and operated by the Txueka family. The Txueka family was the driving force behind the foundation of the D.O. Records dating back to 1649 from the Gipuzkoa Protocol Archives mention Domingo de Etxaniz growing grapes in this region. The family has carried on this tradition for centuries, and are now the largest and most important producer in the area, owning a total of 35Ha. of vineyards on the incredibly steep slopes overlooking the Bay of Biscay. The grapes are planted on pergolas to afford maximum air drainage, but when the slopes are too steep, they are planted on trellises. Txomin Etxaniz’s plantings are 90% Hondarrabi Zuri and 10% Hondarrabi Beltza. 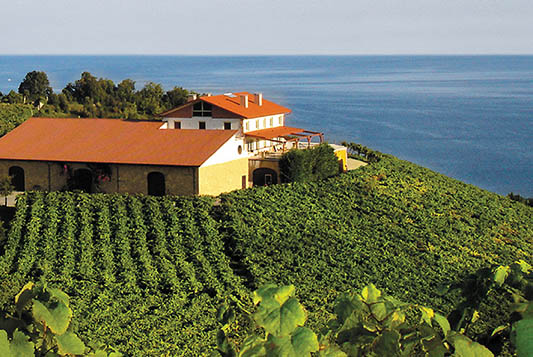